STIR IT UP ｜ The Story So Far.. 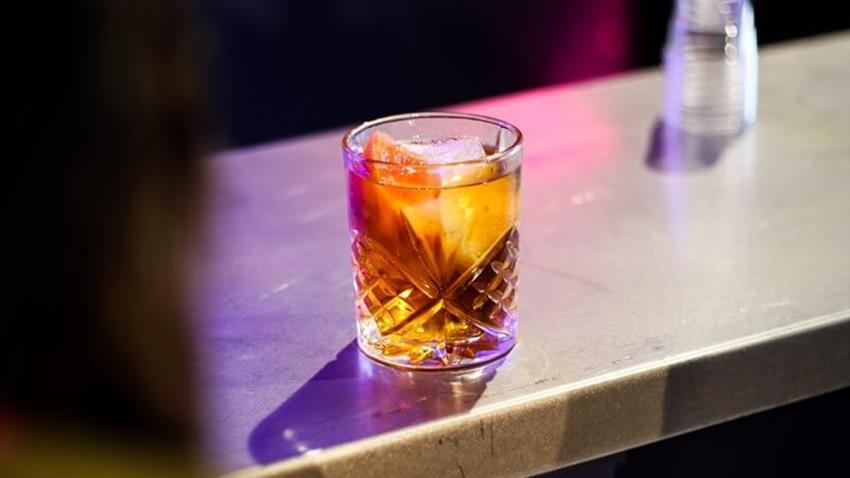 We’ve travelled the nation to search far and wide for the UK’s best up-and-coming cocktail bartenders. We were bolded over time and time again by the quality of cocktails across the UK bar scene. Mixologists from cities as distant as London, Dundee, Cardiff, and York are represented in the final after romping through their regional heats. Luckily, the task of choosing our final eight fell on the shoulders of our judges, industry experts selected from across the On-Trade landscape. It wasn’t easy.

After the deadline for entries had passed, and our team of spirits experts had selected 30 semi-finalists, we headed to London’s Old Truman Brewery for the first of our regional heats. Here, seven cocktail maestros would be preparing their signature serve for James Goggin the UK Portfolio Ambassador for Maverick Drinks and Gian Jesus, the manager of laid-back London cocktail haunt, Happiness Forgets. Five minutes is all they had, to make, shake, and discuss the inspiration behind their cocktail.

This year we asked contestants not to break the rules, but to smash them – so we were expecting some surprises. The biggest of which perhaps came from Ryan Betts of Rocksalt bar and restaurant in Folkestone who blended Tanqueray Rangpur Gin with Salted Avocado Purée. The judges, however, were charmed by the creation of Skylight London’s Seb Hillingworth. His cocktail, called Jalisco Sky combines Marshmallow and Tequila. Based on one of Dick Bradsell's greatest discoveries, the Bramble, but with tequila rather than gin and a summery twist of apricot – topped with a burnt marshmallow. 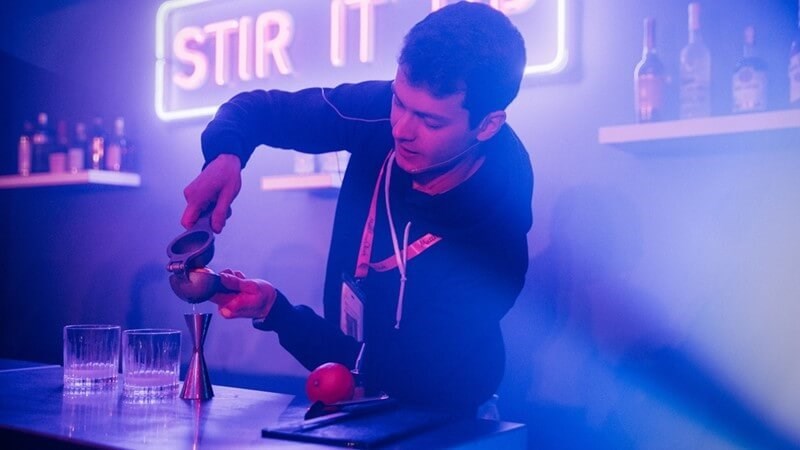 The judges were not basing their decisions solely on the contestant’s prepared recipes – they wanted to test their abilities to come up with something on the fly. The second round saw each bartender answer a set of questions, each correct answer allowing them to scavenge one ingredient from around the Uncovered London tasting event. With these, they had to create a punch bowl serve off the hoof. With some mixed results!

As at all of our STIR IT UP heats, the judges had to select two contestants to go through as joint winners. Seb Hillingworth had taken one of those places, but one was still available. That second slot would be taken by Alexander Aber, representing The Botanist in Marlow. He had chosen a Southside as a base on which to build a punchy herbaceous cocktail inspired by the English garden. The cocktail, the Rosemary Honey Southside, was a mix of Tanqueray No 10 Gin, Drambuie, Lemon juice, honey, and Rosemary.

Video: Watch the first round of the London STIR IT UP heat

With two spots taken it was now the turn of eight cocktail bartenders from north of the border to show what they had. The brief for STIR IT UP 2019 was discovery, original and innovative cocktail creations that showcase new and exciting flavour combinations – this is what judges Jamie McDonald, a former winner of the ‘best bartender in the UK’ title, and Alastair Mather of drinks giant Pernod Ricard UK would be scoring contestants on in the opening round. The judges would not be short of intriguing combinations. Bréagha Wolfgang who represented Bird & Bear Bar in Dundee was fusing Cherry, Orange, Black Pepper and Seaweed flavours with Reyka Vodka, while Aidan Rivett of Glasgow’s Bungo Bar and Kitchen was mixing the tastes of Tomato, Strawberry, Lemongrass, Orange and Mint! 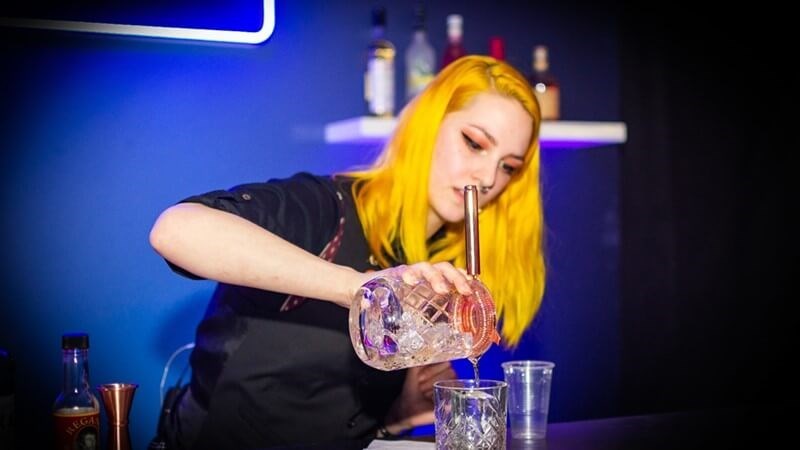 Mark McCarthey was inspired by the original settlers of Iceland – the homeland of his chosen base spirit Reyka Vodka. His cocktail, the Flight of The Raven, combined wheat milk liqueur, which represented the livestock that would have supported the settlers, and bee pollen cordial which represented the only sweetener known to Vikings, honey. Blended with the volcanic Reyka Vodka, the cocktail is served over a single large ice-cube, representing Iceland’s glaciers, and sprayed with a saline mist to represent the ocean which surrounds the island nation. The drink wowed the judges, and The Voyage of Buck bartender duly scooped one of the two spots

Bréagha would take the other place in May's final. Inspired too by those that have travelled the seas, the Dundee based bartenders cocktail Puget Rock was influenced by her home town and the Dundee Antarctic Whaling Expedition of 1893. STIR IT UP was the mixologist’s first cocktail competition, a trait common amongst those that have succeeded in the competition over its first two years. STIR IT UP 2018 runner up Amy, and STIR IT UP 2018 Wildcard champion Stevey, were both competition debutants too.

The finalists will be battling it out between them to enjoy a two-night stay in Reykjavik and a visit to the charmingly Reyka distillery in Iceland. The prize is a fantastic opportunity to discover Iceland, a land of massive glaciers, subterranean volcanoes, psychedelic nocturnal auroras and cozy sweaters – a trip everyone at Matthew Clark is slightly jealous of missing! The bar had been set high in the first two heats, and now it was up to Adam Wilson of Manchester’s Liars Club and cocktail consultant Pedro Hunter to narrow down a field hailing from right across the north of England.

First to take to the bar in Manchester’s Victoria Warehouse was Leigh Brown of Institution in Warrington. His creation, the Mont Blanc cocktail had intrigued our spirits experts with its use of Absinthe and Sauvignon Blanc wine. Leigh had hoped that his cocktail would tap into the growing trend of using wine in cocktails and aimed to blend the subtle flavours of France with some of the bolder tastes of Italy. Using Grey Goose La Poire as his base, the mixologist stirred together the vodka, wine, and absinthe with Fernet Branca and Amaro Montenegro. Strained into a chilled coupe glass and garnished with a maraschino cherry, the judges loved this concept and awarded Leigh with a place in the finals. 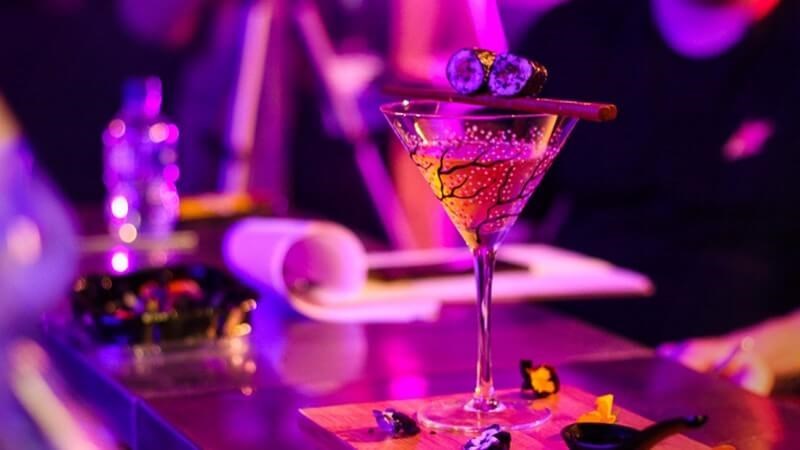 The Manchester heat did not let us down; each competitor wowed the judges in what was a competitive field. Mariano Ferrara of Hotel Gotham’s Club Brass in particular impressed with the visual appeal of his oriental inspired Marco Polo cocktail as did Ciara Adams of The Crypt Bar in Lancaster who only started bartending seven months ago. It was, however, York-based events bartender Bradley Naylor who took the second of the available spots. Bradley’s bright blue Manuia cocktail was a Polynesian ‘tiki’ inspired drink that honoured innovation and discovery of bartenders past. First, the cocktail glass was sprayed with Absinthe before all ingredients were shaken with ice and fine strained. The finishing touch came in the form of a salted pineapple foam and an edible flower!

The contestants came from Cardiff, Bristol, Bath and Exeter for the final STIR IT UP 2019 regional heat. After the competition, our nationwide tour would be through, and we would have our final line-up, the eight best up-and-coming bartenders in the UK would have been selected. Respected Bristol based bartender and Monkey Shoulder’s Ultimate Bartender Championship winner Chelsea Bailey, and the man behind Bristol’s Her Majesties Secret Service bar, Ben Alcock, assumed judging duties for this year, at the heat that gave us last year’s champion, Alex Mills of Lab 22 in Cardiff.

Cardiff would be represented this time around by Jamie Lock of the well-respected Heaney's Restaurant founded by Chef Tommy Heaney. Jamie’s cocktail was all about whisky, with Glenmorangie Original mixed with a peaty blended scotch, Crème de Violette, maraschino liqueur and lemon juice. Taking inspiration from the Aviation cocktail, Jamie wanted to help introduce scotch whisky to a broader range of drinkers with his innovative cocktail. Last year’s winner Alex had the same goals with his creation, but this is not where the similarities end with Jamie too heading through the first found and into the London Grand Final. 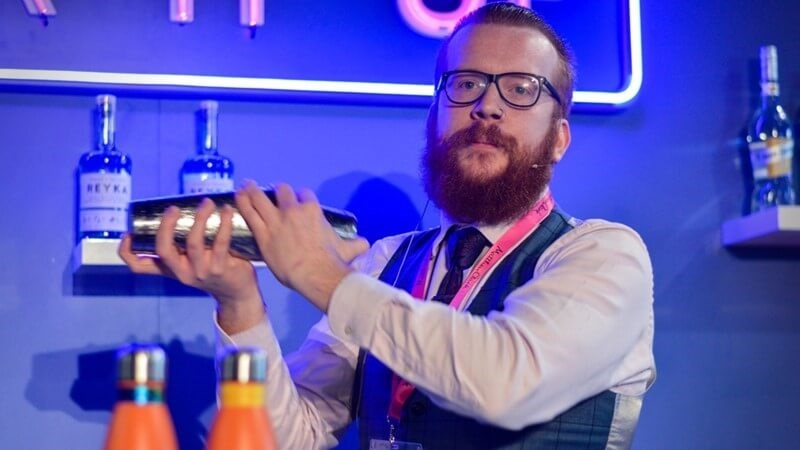 Jacob Drew shaking up his cocktail The Tip of the Iceberg.

So with one space left in the final, the competition could not have been livelier. Would Alexandru Graure of Bristol’s Mint Room triumph with his mix of Kraken Black Spiced Rum, Blood orange liqueur, and Aqua Riva agave syrup, or would it be Jacob Drew of renowned Exeter bar Doctor Inks Curiosities with his creation, The Tip of the Iceberg? A strong contender was quick to emerge in the shape of Mathew Hawksworth from Bath’s award-winning cocktail bar The Dark Horse. Matthew’s cocktail called the Luminary Comanche was a masterful mix of Maker's Mark Bourbon, Marie Blizzard Banana Liqueur, lemon juice, honey syrup, and pink grapefruit and tarragon soda, and inspired by space travel. The final place was taken, Mathew would be the one to represent the South West in the final.

Attention now turns to the Grand Final taking place on the 1st of May at London’s Forge bar. It’s a wide open field, with everyone in with the chance of winning. Two tense rounds will be judged by 2018 champion Alex Mills and our spirit boffin Ian Daws before they name the 2019 STIR IT UP champion. The champion will, no doubt, be covered in glory and have a glow that will outshine the Aurora Borealis they will soon be witnessing in Iceland. It is set to be an amazing event!

If you missed out, this is not the end! We’ve joined forces with Pernod Ricard in a STIR IT UP Wildcard round to give four more bartenders their chance to shine at the STIR IT UP final this May. Anyone working in the on-trade can enter the Wildcard round by uploading a video or photo of their signature cocktail by 12th April on Instagram using the hashtag #Stiritupwild and tagging @MatthewClarkltd and @PernodricardUK. Find out more here.