STIR IT UP | The Final

Back in January we launched STIR IT UP. Our aim was to demystify the cocktail category through training and education to help our customers make more from the booming cocktail trend. We ran a series of UK-wide workshops from the beginning of February, to help outlets get started with cocktails. For the slightly more experienced cocktail connoisseurs, we worked with over 30 leading brands to offer our first nationwide cocktail competition.

Now the dust is beginning to settle. On Tuesday, 10th April we opened the doors to our 8 finalists, who had battled through regional heats, along with 4 wildcard contestants, who had impressed us with their social media entries, to compete for glory and some pretty amazing prizes provided by Maker’s Mark bourbon and Pernod Ricard.

The first round was for the Pernod Ricard Wildcard. From all the entries we received on Instagram and Twitter our judges had selected 4 finalists to compete for a trip to the Absolut Bar Academy. This would first take the winner to Åhus, the home of Absolut before heading to Stockholm to uncover the local cocktail scene. 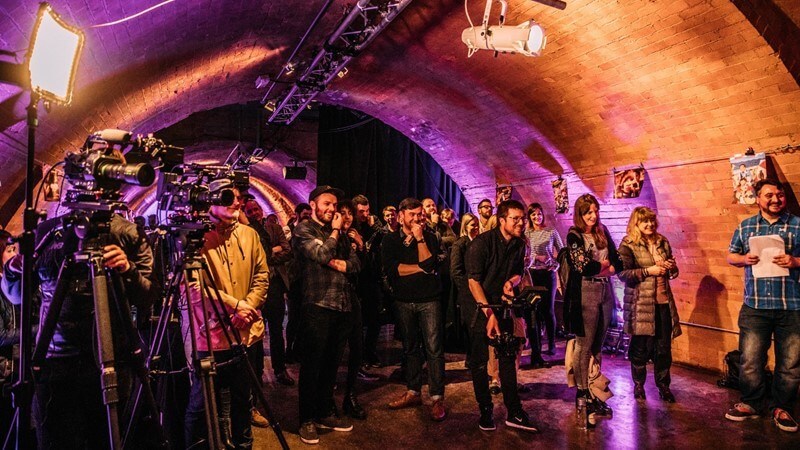 First to take to the bar was Eduards Trofimcuks, representing Blythswood Square Hotel in Glasgow. His cocktail, the Ren, is a mix of Absolut Pears vodka, fresh lime juice and bergamot liqueur with a few dashes of Pernod for a more complex taste profile and a spritz of soda to make it even more refreshing to sip on a warm summer’s day.

Eduards was followed by Chris Jarret of Wax Bar & Kitchen in Newquay. After learning about how Jameson Caskmates came about, a union between whiskey and beer, Chris wanted to bring the two elements back together. His cocktail, The Dublin Sours, is a riff on the classic whiskey cocktail that enhances the uniqueness of Jameson Caskmates’ stout elements by employing a Guinness and chocolate bitters float.

Local competitor Antonio De Santis presented his cocktail Mediterranean Breeze next. Unsurprisingly from someone who works at London’s Rum and Sugar bar, the cocktail is made with Havana Club 3YO. The drink combines rosemary, which gives a woody taste, orange juice and black pepper, to give a kick to the palate. Everything shaken with Havana Club and a bit of. It is double strained and served in a super chilled martini glass. Garnished with orange peel and a rosemary spring. 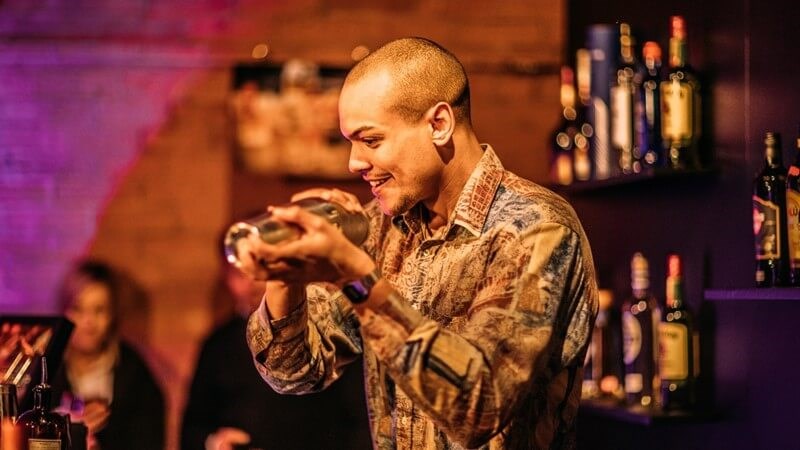 The final wildcard contestant, Stevey Arroyo, was representing Salt Dog Slim’s in Liverpool. His cocktail was born out of finding the perfect drink for an indecisive guest. It must have been the perfect drink as Amelia, the customer the drink is named after, was in the crowd cheering Stevey along! The drink brings together Monkey 47 gin, Cointreau, lemon, sugar syrup, grapefruit bitters and champagne for a crisp freshness that we all need on hot days.

We then moved swiftly on to the first round of the STIR IT UP competition. The winner over the following rounds would scoop a trip to the USA with the bourbon legends - Maker’s Mark, Jim Beam and Knob Creek. The experience includes a private tasting held by Jim Beam Master Distiller, Fred Noe, ensuring that winning Stir It Up will not only get the winner an unbelievable trip to the USA but will endow them with the knowledge and experience to make premium American whiskey work for their outlet.

Alex Mill’s Nan was a terrible cook but an outstanding baker, at least that’s what the Lab 22 bartender says. His cocktail, The Lowland Highball was inspired by one of the delicious bakes his Nan made him. It’s a long summery drink that aims to cast some well-earned limelight back onto scotch, a spirit usually absent on hot weather menus. The Collins style cocktail pair’s bourbon cask aged Auchentoshan with peach and thyme to recreate the flavours of his childhood favourite, Nan’s peach and thyme tartlet. 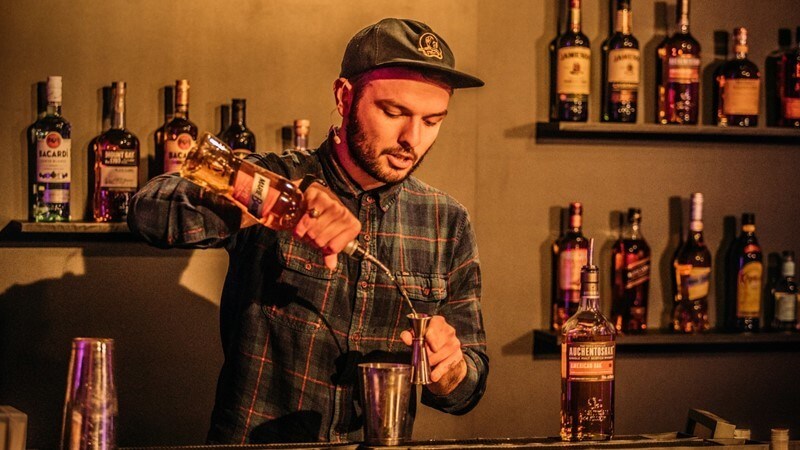 Representing London’s Skylight bar was Tom Cavanagh. He’s a bartender that enjoys bringing a smile to people’s faces and say’s “working in the hospitality industry is a great way to go about doing that”. His cocktail is the Skylight Sangrita, a twist on a white sangria and margarita, two summer cocktails that have stood the test of time. In his version Patron Silver Tequila, Marie Brizard triple sec, Yellow Chartreuse, salted peach and agave puree, peach bitters, Dr Loosen Riesling and fresh mint are combined for a fruity twist on a classic. 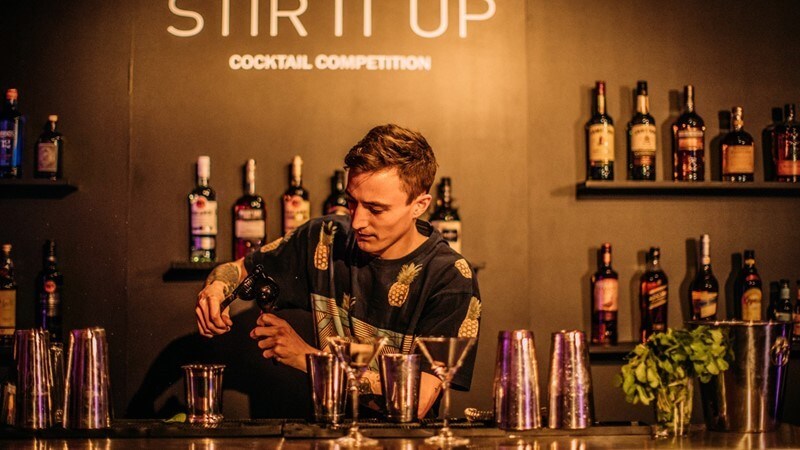 With The Summer Rose, Ghetto Golf manager Danny Dowds was next to present. His cocktail is a twist on a clover club using Rose Liqueur. This drink in his own words, “encapsulates the essence of summer remaining fresh and light but still keeping true to the flavour from the gin”. His inspiration came from the region of where Monkey 47 gin is made, every summer there is a Rose festival which brings a lot of tourism to the area. This drink depicts the enjoyment of sitting watching the world pass by in this rose covered German hamlet.

Making the long journey from Exeter bar Doctor Ink's Curiosities was Thomas Ryan. He impressed our judges at the Bristol heat with his cocktail, Cardinal. Patron Tequila, strawberries and citrus blended together for a super refreshing summer serve. “I knew I wanted to riff on the Paloma cocktail as to me it is the perfect summer serve. I ended up combining a few different ideas that all say summer to me; the Paloma, the summer cup, gin and tonic” said Thomas of his creation. 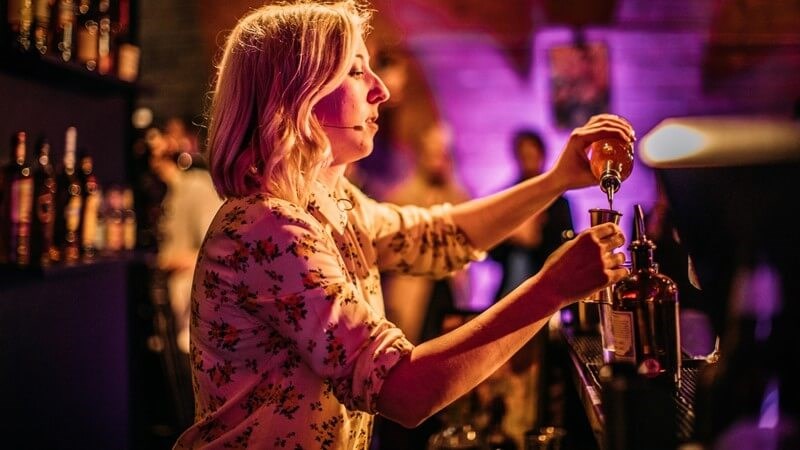 Amy Swanton aimed to evoke a tranquil Sunday morning in the back garden with her cocktail, Easy Like A Sunday Morning. The cocktail was created when Amy experimented with the few ingredients she had at home, Marmalade, Camomile tea, sugar, lemon and Monkey 47 gin! Amy, who works in the One Eleven bar at The Aviator Hotel in Farnborough, like a number of the day’s competitors, was competing in her first-ever cocktail competition.

Representing the Mediterraneo Italian Restaurant and Champagne Bar in Glasgow was Kristijonas Bazys. His cocktail, Winter Death, was rather more cheerful than the name suggests. “Light, crispy and fruity”, the Bacardi Carta Blanca based cocktail was completed with RinQuinQuin and Marie Brizard Orgeat. Some fresh lime juice was added to balance out the sweetness before the liquid was shaken and served. Laphroig 10 whisky was sprayed on the top of the glass to garnish along with edible flowers!

Last but by no means least, Caz Park made the trip from The Voodoo Rooms in Edinburgh to present the new tiki classic, the Nana Colada. Evoking the story of Sailor Jerry and playing on his eponymous spirit’s spiced notes, the classic banana and walnut flavour combination was added to the mix. A touch of fresh lime, pineapple juice and ginger beer were added to balance it all out. Caz said the aim of the Nana Colada was to “try and capture that holiday feeling”, why drink either a Pina Colada or a Mojito when you can have both? You’re on holiday after all! 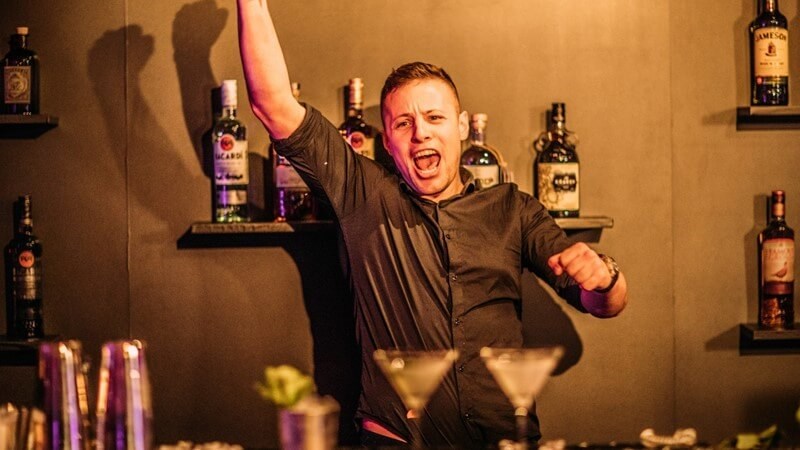 The speed round followed. Contestants were tasked with creating a Southside, a Classic Daiquiri and a Mint Julep as quickly as possible. Time penalties were added for unbalanced drinks, missing garnishes and presentation. The performance of each contestant in this round would be combined with scores from round one to find our winner! The quick pace was no match for Kristijonas Bazys who championed as the quickest mixologist in town.

And then, the hard part. Judges hid away to deliberate before reappearing with what everyone was waiting for. Every contestant produced superb performances and excellent cocktails. We’re incredibly thankful to each and every one of them for producing such a thrilling and close-run final.

First to be announced was the Pernod Ricard Wildcard. Presented by Absolut Brand Ambassador Dani Umoette, the winner was Stevey Arroyo of Salt Dog Slim’s. His cocktail Amelia, winning him an unforgettable experience visiting the Absolut Bar Academy - a world-class educational experience delivered by some of the world’s finest professional bartenders in Åhus and Stockholm! 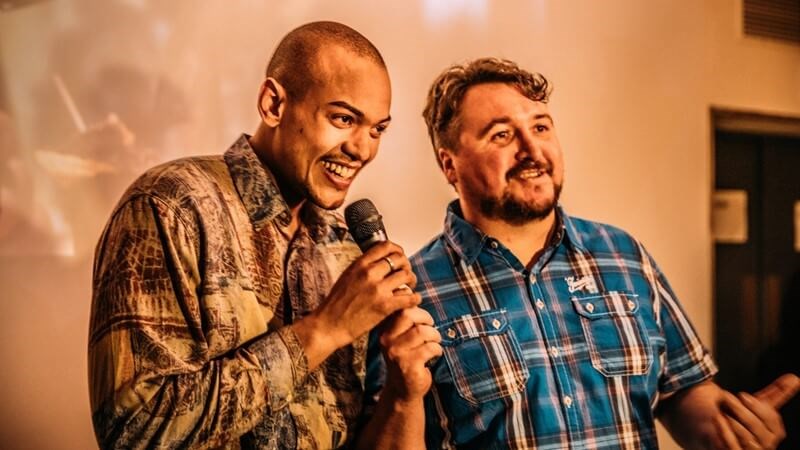 The judges found naming a STIR IT UP winner a difficult task, as such, they decided to name a runner-up. Coming in a close second was Amy Swanton of The Aviator Hotel with 'Easy Like A Sunday Morning'. A superb achievement in her first cocktail competition.

Now was the time for the main announcement. Who was going to jet off to the USA with Maker’s Mark and Jim Beam? This prize would see one lucky winner and a plus one spend 3 nights in Louisville and 2 nights in Chicago while taking in distilleries, bars, a baseball game and that private tasting with Jim Beam Master Distiller, Fred Noe. Our very own Tom Green got to do the honours with Edrington-Beam Suntory presenting the trophy. His Nan may not have been the best cook, but it certainly paid off for our STIR IT UP 2018 winner, Alex Mills. Congratulations from all of the Matthew Clark team! 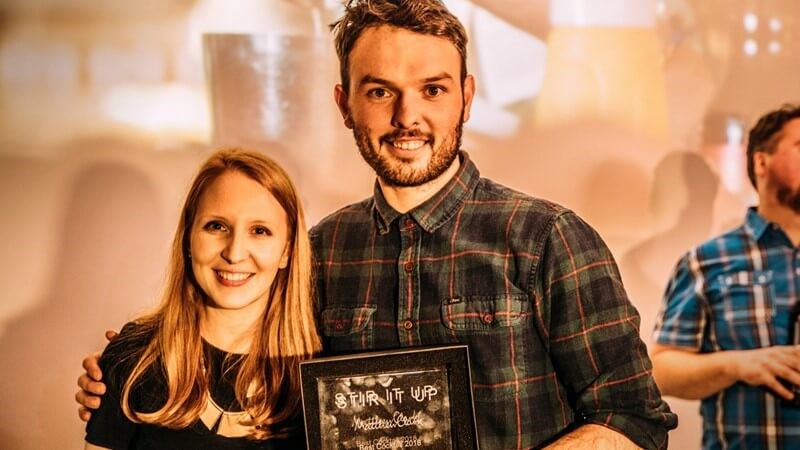 We’d like to say a very big thank you to everyone who submitted an entry, competed in the regional heats and attended the final, we appreciate all of the effort each of you put into creating some super summer serves. A thank you also to our sponsor brands who supported STIR IT UP, Maker’s Mark, 1800 tequila, Absolut Vodka, Aqua Riva Tequila, Auchentoshan, Bacardi, Bulleit Bourbon, Courvoisier, José Cuervo, The Famous Grouse, Grey Goose, Havana Club, Jameson, Johnnie Walker, Kahlua, Ketel One, The Kraken, Larios, Marie Brizard, Monkey 47, Monkey Shoulder, Mount Gay Rum, Pampero Rum, Patron, Primrose Hill Mixers, Rémy Martin, Sailor Jerry and Woods Old Navy Rum. Finally, thank you to our judges Simon Webster of Bar Life UK, James Goggin of Maverick Drinks and our very own Tom Green – thanks also to our compere for the day Joseph St Clair-Ford and everyone else who made the competition possible.

Inspired to serve cocktails in your outlet? Find out more about our Spirit Specialists here. To find out more about our spirits range, take a look here. We're here to support you with everything that you need to make your range a success, from free menu design and print and barware at exclusive Matthew Clark prices. 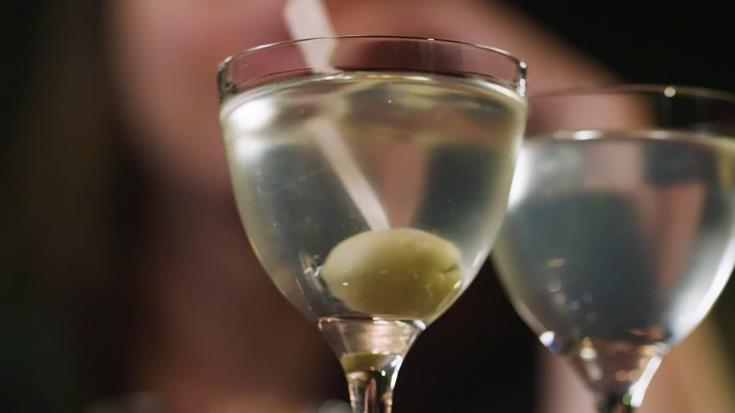