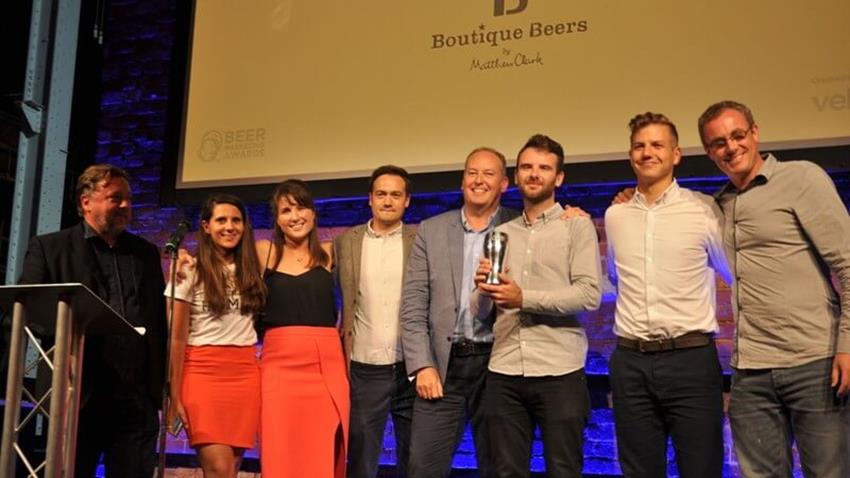 On the evening of the 8th of September, our Boutique Beers team headed to London’s Old Truman Brewery, a venue familiar to us from Craft Beer Rising earlier in the year. This time, however, although the beer was still in full flow, the space had been transformed into an awards ceremony fit for the best movers and shakers in beer marketing.

I am of course talking about this year’s Beer Marketing Awards, we which we lucky enough to be the main sponsors. The awards were created to recognise those who push the beer boundaries. The team were in good company with many of the talented suppliers that we work with in attendance.

BrewDog, Fullers, Guinness, Heineken, Budvar and Shepherd Neame all walked away with an award while Sharp’s Brewery was highly commended for best integrated campaign. We’ve listed the winners in full for you, below.

Our very own beer boffin Justin Wylde was tasked with judging the ‘Best Innovation’ category, a competitive category that was ultimately won by Island Records and Soundwaves Brewing for creating the first ‘Shazamable’ can.

The final award of the night, the overall winner, Grand Prix 2016 in association with Boutique Beers was taken home by Guinness for the outstanding work around the Rugby World Cup and the St. James’ Gate Brewers Project.

Although we talk a lot about the quality of the liquid inside the bottles and the awards success that brings, it’s important that we take the time to recognise those who market beer, and in turn help drive consumers to the category, engage with them and grow the market, that is what all the people here tonight have achieved.

The night was topped off in the most fitting way possible with some Boutique Beers, including best launch winner, BrewDog Jet Black Heart, and early nights all round. It was a school night after all. I’m sure Justin wouldn’t lie to me about that.

Boutique Beers was the proud sponsor of the Beer Marketing Awards, to find out more about this range of high-quality brews from some of the world’s best small brewers take a look at our 2016 brochure.